Imagine a chicken coop: fortified against hawks, foxes, weasels, coyotes, yet designed for the illusion of access to the outside world. 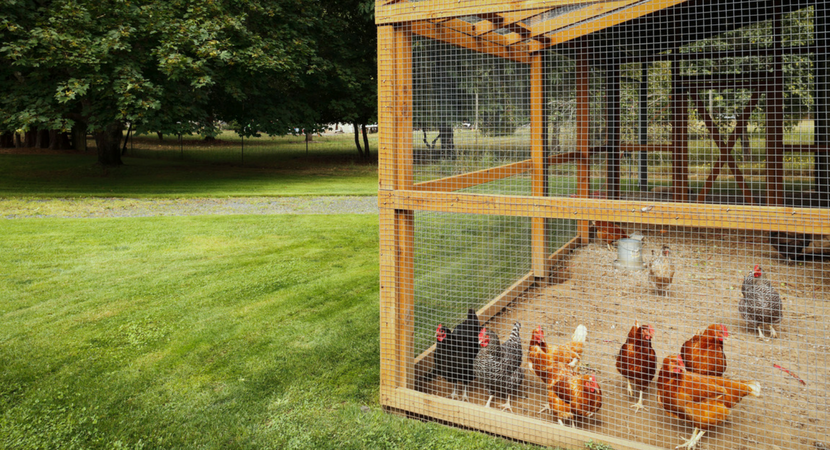 The material balancing these needs? The coop’s mesh lining—flexible, uniform, and sturdy enough to keep out malevolent critters. Similarly, in the world of animation, mesh is a choice material for the creation of flexible virtual characters. Like the wire cloth found at Home Depot, animators use a material made of conjoined polygons to “line” their characters. While 3D animators have always used meshes for their characters and objects, traditional 2D animation was created by drawing movements frame-by-frame. Even today, many 2D animation softwares do not support the use of 2D meshes. 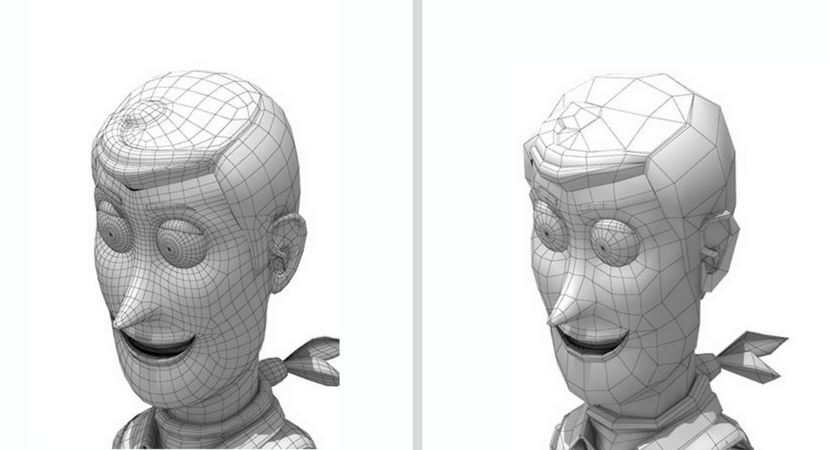 (Woody, from Pixar’s Toy Story series, as a high and low polygon mesh. Image from fabelar.)

These connected geometrical shapes break down the character into units that allow animation software to move and deform the object (similar to how images are broken down into pixels). One can think of the number of polygons on a virtual object as its resolution—the more units, the more nuanced and detailed the character can be: however, higher resolution also means the need for more computational power, so animators are always negotiating a balance between detail and function. This is why characters in games, whose motions must be generated (“rendered”) real-time, tend to have lower polygon counts than animated characters in film, which can be pre-rendered over hours or days on many computers. (It took 29 hours to render a single frame for Monsters University!)

We’ll begin our 2D animation course by taking advantage of virtual mesh. Rather than wrapping polygons around a 3D object, we’ll lie them flat underneath our character's limbs and features: setting our 2D character up for the same procedural movement that allows 3D artists to animate with precision and speed. And, just like in 3D, the polygon count of our mesh will dictate the resolution of the 2D character’s movements.

Creating a 2D Mesh for Your Character

Step One: Design Your Character for Animation

You’ll need to start with a character you want to animate. There are two formats you can use to import a character into Creature: an “Image Atlas” PNG file, or a PSD Photoshop file with layers.

An “Image Atlas” PNG is an image file with all the features of your creature separated out like a paper doll. PNG files support clear backgrounds, which the Creature Software will need to detect your creature's limbs. Don’t know how to make a PNG? It’s easy! You can make one with Photoshop, or a free alternative like GIMP. Download my Pluma PNG example here.

A PSD is a Photoshop file. Save your characters in this format with separate layers for each limb. (The Creature Software will even remember the names you have given your layers and how they are arranged.) There are also many useful tutorials for Photoshop beginners. Download my Pluma PSD example here.

Tips for Designing Your Character

By keeping these questions in mind, you can simplify the process for rigging and animating later on. The most basic, and possibly most important step in prepping your artwork for Creature is making sure your character is properly divided up (regardless of whether you are using a layered PSD file or an image atlas PNG).

Where will you see the most rotation? A good place to divide these pieces is where you expect to see extreme amounts of rotation. Anatomy is a great reference for this, consider the natural joints found in animals or the human body such as the knees and elbows. Other areas where you can expect to see rotation include a character’s shoulders, head, and thighs.

Which pieces can overlap? By dividing a character’s shirt and pants you can get overlapping that feels realistic rather than stretching and squashing from a solid piece of art. If your character has, say, a scarf or jewelry, you would want those items to move and react independently, rather than move statically with your character’s torso or limbs.

What materials are used for your Character? How do these materials react to physics or forces? Think of your character jumping up and down, or standing in extreme winds—how do you expect the different materials on your character to react? The most reactive materials or features will likely need to be separated (possibly into more than one piece). For example, flowing cloth, hair, chains, rope, tails, or feathers would all react in unique ways to outside forces. Or, If you have a human with metal armor, you can separate out the large metal pieces to ensure they remain rigid and do not squash and stretch during animation.

Do you have repeating elements? You can easily duplicate any piece within Creature, while also keeping the mesh you created from the start. When you progress through the software you can also move and scale these duplicated elements as needed. For the character I created I duplicated the tail feathers, scaling some down for her shoes.

Does your character blink? Separate each eye that you want to have blink. When you start to animate in Creature you can apply a blink motor to automate this process.

It can be tempting to divide your character into a hundred pieces, but be economical when you are starting out and think of where you will get the most impact from separating out a piece. If you have too many pieces it can make creating each mesh and rigging take longer. You can also experiment with importing a solid character and see where you need more flexibility for rigging next time.

Once you have your file, open Creature, set a project folder, choose your file, and click “Create”! If you accidentally chose the wrong image file click the “Import” button next to “Mesh”. If you want to add additional limbs or features without replacing what you have already imported, select “Add/Insert New Image Part”. When adding a new image part you can position the new element as needed within Creature. See the bottom of this post for Creature download instructions.

Pack Resolution will determine the size of your image when you export your animation later on. You can use the dimensions of your source image as a reference. If you are unsure, set this value to an increment of 256 (1024, 2048, 4096, etc), these are the common dimensions for texture maps used in games and animation.

Padding determines how close or far apart each PSD layer will be laid out within Creature.

When importing a PNG, resolution and padding are already defined according to your file dimensions and laid out pieces.

Congratulations! Your character is now a 2D Mesh. Let’s make sure the Mesh is ready for rigging.

We’ll start by making sure everything is functional. To do this we need to make sure each of your features has a mesh region with distinct boundaries. This is also a good time to customize your character mesh resolution for optimal flexibility and function. The default resolution should work well for most.[1]

If the boundaries of your pieces have connecting mesh regions, you can redefine their boundaries using the “Boundary Remesh” tool on the upper left side of your screen. However, note that the Boundary Remesh tool will not preserve any existing names given to your mesh regions.

To increase or decrease the resolution across all your mesh regions, use the “Remesh” tool on the upper left side of your screen. This will dictate how many polygons there are in your mesh. (You’ll be able to adjust the resolution of individual regions later.)

Now you are ready to fine tune the mesh of each feature.

To create a custom polygon, conjoin two mesh regions, add a new mesh, or to delete a mesh, use the “Mesh Functions” panel on the lower right hand side of your panel. Keep in mind, meshes need to be the same resolution to be merged.

For Pluma, I used these tools to achieve a medium to high resolution (between 100-200) for each piece, in order to ensure I got the range of movement I needed; some elements needed more polygons in order to create a believable bounce, sway, or dangle during animation. For these pieces, such as the small feathers on Pluma’s shoes, I used either the “Subdivide” or “Region Remesh” tools to get the necessary resolution.

Then I would use the Modification Functions to refine the mesh regions according to the silhouette of each piece. Creature allows you to optimize your animation during export, so I didn’t need to worry about having too high a polycount during this phase of my project.

I also tried to get my polygons to all have a square ratio of 1:1 because this is the easiest way to get predictable results during animation. When your polygons do not form perfect squares you may end up getting unexpected deformations.

Step Five: Check and Save

Click through your mesh regions to make sure everything is how you want it. And you’re all set! Don’t forget to save your project.

Mesh Mode: Default mode when you open Creature. Allows you to create and modify meshes
Mesh Regions: Created with polygons, pieces that are rigged and animated
Import Image: Use this to import your character to Creature. Supports PNG or PSD.
Add/Insert New Image Part: Add more images instead of replacing existing mesh.
Boundary Remesh: Separates conjoined mesh regions.
Remesh: Batch edit the resolution of all mesh regions at once.

Lesson 2: Adding Bones to your Character

Creature animation software free download is available here! Students of this tutorial can use the code DMCreature101 for a free 30 day license, redeemable here.

About DeepMotion
San Mateo, California, United States Website
DeepMotion is a pioneer in the emerging field of Motion Intelligence. We are building tools for lifelike procedural animation using physical simulation and artificial intelligence.
Previous Post : How to Build Your Own Box Robot in Unity   Next Post : Learning 2D Character Animation 101
Copyright © 2023, DeepMotion. All right Reserved.